Fibroids are muscular tumors that grow in the wall of the uterus (womb). Another medical term for fibroids is “leiomyoma” or just “myoma”. Fibroids are almost always benign (not cancerous). Fibroids can grow as a single tumor, or there can be many of them in the uterus. They can be as small as an apple seed or as big as a grapefruit. In unusual cases they can become very large.


Why should women know about fibroids?

About 20 percent to 80 percent of women develop fibroids by the time they reach age 50. Fibroids are most common in women in their 40s and early 50s. Not all women with fibroids have symptoms. Women who do have symptoms often find fibroids hard to live with. Some have pain and heavy menstrual bleeding. Fibroids also can put pressure on the bladder, causing frequent urination, or the rectum, causing rectal pressure. Should the fibroids get very large, they can cause the abdomen (stomach area) to enlarge, making a woman look pregnant. 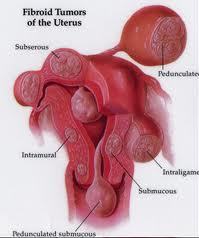 There are factors that can increase a woman’s risk of developing fibroids.


• Family history – Having a family member with fibroids increases your risk. If a woman’s mother had fibroids, her risk of having them is about three times higher than average.


• Obesity – Women who are overweight are at higher risk for fibroids. For very heavy women, the risk is two to three times greater than average.


• Eating habits – Eating a lot of red meat (e.g., beef) and ham is linked with a higher risk of fibroids. Eating plenty of green vegetables seems to protect women from developing fibroids.


Where can fibroids grow?

Most fibroids grow in the wall of the uterus. Doctors put them into three groups based on where they grow:

Intramural – fibroids grow within the wall of the uterus.

Subserosal – fibroids grow on the outside of the uterus.


Some fibroids grow on stalks that grow out from the surface of the uterus or into the cavity of the uterus. They might look like mushrooms. These are called pedunculated fibroids. 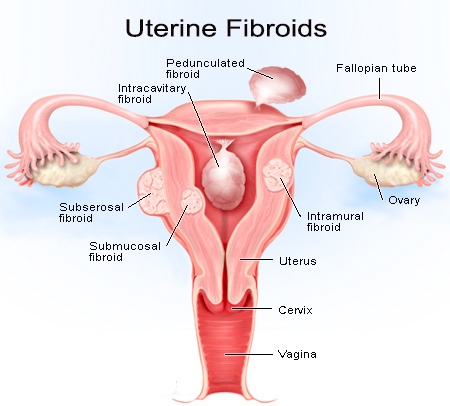 What are the symptoms of fibroids?

Most fibroids do not cause any symptoms, but some women with fibroids can have:

• Feeling of fullness in the pelvic area (lower stomach area)

• Enlargement of the lower abdomen

• Complications during pregnancy and labor, including a six-time greater risk of cesarean section

• Reproductive problems, such as infertility, which is very rare

No one knows for sure what causes fibroids. Researchers think that more than one factor could play a role. These factors could be:


Because no one knows for sure what causes fibroids, we also don’t know what causes them to grow or shrink. We do know that they are under hormonal control — both estrogen and progesterone. They grow rapidly during pregnancy, when hormone levels are high. They shrink when anti-hormone medication is used. They also stop growing or shrink once a woman reaches menopause.


Can fibroids turn into cancer?

Fibroids are almost always benign (not cancerous). Rarely (less than one in 1,000) a cancerous fibroid will occur. This is called leiomyosarcoma. Doctors think that these cancers do not arise from an already-existing fibroid. Having fibroids does not increase the risk of developing a cancerous fibroid. Having fibroids also does not increase a woman’s chances of getting other forms of cancer in the uterus.


What if I become pregnant and have fibroids?

• Cesarean section. The risk of needing a c-section is six times greater for women with fibroids.

• Baby is breech. The baby is not positioned well for vaginal delivery.

• Placental abruption. The placenta breaks away from the wall of the uterus before delivery. When this happens, the fetus does not get enough oxygen.


How do I know for sure that I have fibroids?

Senior gynecologist in Kolkata may find that you have fibroids when you see him for a regular pelvic exam to check your uterus, ovaries, and vagina. Gynecologist doctor can feel the fibroid with his fingers during an ordinary pelvic exam, as a (usually painless) lump or mass on the uterus. Often, Leading gynaecologist in Kolkata Dr.Sankar DasMahapatra will describe how small or how large the fibroids are by comparing their size to the size your uterus would be if you were pregnant. For example, you may be told that your fibroids have made your uterus the size it would be if you were 16 weeks pregnant. Or the fibroid might be compared to fruits, nuts, or a ball, such as a grape or an orange, an acorn or a walnut, or a golf ball or a volleyball.


Renowned gynaecologist in Kolkata can do imaging tests to confirm that you have fibroids. These are tests that create a “picture” of the inside of your body without surgery. These tests might include: 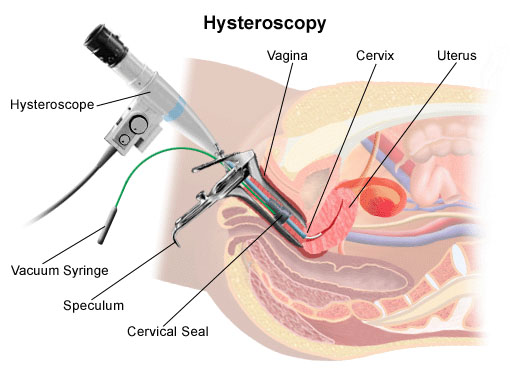 You might also need uterine fibroid surgery in Kolkata for the removal of fibroids. There are two types of surgery to do this:


• Laparoscopy – Laparoscopic surgeon inserts a long, thin scope into a tiny incision made in or near the navel. The scope has a bright light and a camera. This allows the Laparoscopic surgeon to view the uterus and other organs on a monitor during the procedure. Pictures also can be made.


• Hysteroscopy – The doctor passes a long, thin scope with a light through the vagina and cervix into the uterus. No incision is needed. The doctor can look inside the uterus for fibroids and other problems, such as polyps. A camera also can be used with the scope.