“Dr. Sankar Dasmahapatra is one of the leading Infertility & fibroid specialist performing Myomectomy surgery in Saltlake Kolkata and Kolkata. If you are looking for fibroid treatment in Kolkata, contact Dr. Sankar Dasmahapatra to get relief from your sufferings. Dr. Mahapatra providesthe best uterine fibroid treatment and Fibroid uterus surgery in Kolkata for every patient.”


Myomectomy, sometimes also fibroidectomy, refers to the surgical removal of uterine leiomyomas, also known as fibroids. In contrast to a hysterectomy the uterus remains preserved and the woman retains her reproductive potential. When Myomectomy is required: The presence of a fibroid does not mean that it needs to be removed. Myomectomy surgery is necessary when the fibroid causes pain or pressure, abnormal bleeding, or interferes with reproduction. The fibroids needed to be removed are typically large in size, or growing at certain locations such as bulging into the endometrial cavity causing significant cavity distortion. Patients have many options in uterine fibroids treatment in kolkata , including: observation, medical therapy (such a GNRH agonists), Laparoscopic hysterectomy in Kolkata, uterine artery embolization, and high-intensity focused ultrasound ablation. Despite these many options, the surgical approach of selected fibroid removal remains an important choice for those women who want or need to preserve the uterus. 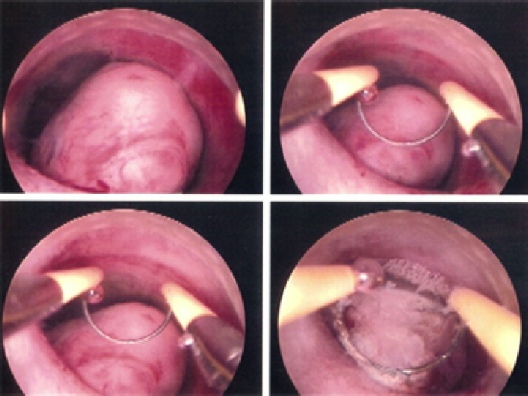 • Hysteroscopy, which involves inserting a lighted viewing instrument through the vagina and into the uterus.

• Laparoscopy, which uses a lighted viewing instrument and one or more small cuts (incisions) in the abdomen.

• Laparotomy, which uses a larger incision in the abdomen.


Methods of Myomectomy depends on:

• Hysteroscopy can be used to remove fibroids on the inner wall of the uterus that have not grown deep into the uterine wall.

• Laparoscopy is usually reserved for removing one or two fibroids, up to about 2 in. (5.1 cm) across, that are growing on the outside of the uterus.

• Laparotomy is used to remove large fibroids, many fibroids, or fibroids that have grown deep into the uterine wall.

• Need to correct urinary or bowel problems. To repair these problems without causing organ damage, laparotomy is usually needed.


After Surgery:
The length of time you may spend in the hospital varies.

• Hysteroscopy is an outpatient procedure.

• Laparoscopy may be an outpatient procedure or may require a stay of 1 day.

• Laparotomy requires an average stay of 1 to 4 days.

• Recovery time depends on the method used for the myomectomy: Hysteroscopy requires from a few days to 2 weeks to recover.


Why it is Done:
Myomectomy surgery in kolkata preserves the uterus while treating fibroids. It may be a reasonable treatment option if you have:

• Anemia that is not relieved by treatment with medicine.

• Pain or pressure that is not relieved by treatment with medicine.

• A fibroid that has changed the wall of the uterus. This can sometimes cause infertility or repeat miscarriages. Before an in vitro fertilization, myomectomy is often done to improve the chances of pregnancy.


How well it works:
Myomectomy surgery decreases pelvic pain and bleeding from fibroids.


Pregnancy:
Myomectomy is the only fibroid treatment that may improve your chances of having a baby. It is known to help with a certain kind of fibroid called a sub mucosal fibroid. But it does not seem to improve pregnancy chances with any other kind of fibroid.2 After myomectomy, a cesarean section may be needed for delivery. This depends in part on where and how big the myomectomy incision is.


Recurrence:
Fibroids return after surgery in 10 to 50 out of 100 women, depending on the original fibroid problem. Fibroids that were larger and more numerous are most likely to recur.3 Talk to your doctor about whether your type of fibroid is likely to grow back.

• Risks may include the following:

• Infection of the uterus, fallopian tubes, or ovaries (pelvic infection) may occur.

• Removal of fibroids in the uterine muscle (intramural fibroids camera.gif) may cause scar tissue.

• In rare cases, scarring from the uterine incision may cause infertility.

• In rare cases, injuries to the bladder or bowel, such as a bowel obstruction, may occur.

• In rare cases, uterine scars may break open (rupture) in late pregnancy or during delivery.

• In rare cases, a hysterectomy may be required during a myomectomy.


This may happen if removing the fibroid causes heavy bleeding that cannot be stopped without doing a hysterectomy surgery in Kolkata.