Hysterectomy is a procedure (operation) performed for removal of the uterus (womb) It is the most common surgery performed by gynaecologists. Hysterectomy can only be performed when future child bearing is not desired by the patient. If you have more question consult with Hysterectomy surgeon in Kolkata Dr.Sankar DasMahapatra. What are the indications [reasons] for performing this procedure? This procedure can be performed for women with any of the below mentioned problems like


Fibroid Uterus:
Fibroids can be symptomatic leading to excessive periods or pressure symptoms.If not treated fibroids can become very big and can lead to ureter (tubes carrying urine from kidney to bladder) & kidney damage.

Adenomyosis:
This condition leads to heavy prolonged periods and severe pain during periods.


DUB:
This condition leads to heavy prolonged or irregular menstrual problems which if not responsive to tablets (drug treatment) or other small surgical procedures like TCRE and may then need a hysterectomy. According to the condition the doctor may advise Hysterectomy for fibroids, adenomyosis, & DUB in Kolkata.


Prolapse of the uterus:
This condition is very commonly present in our Indian population. The uterus descends down into the vagina and is felt as a mass vaginally.


Pelvic Inflammatory Disease / Chronic Pelvic Pain:
These conditions are present as a result of repeated infections and these conditions may also need a hysterectomy.


Uterine / Cervical / Ovarian Cancer:
Cancers are now becoming increasing common but the life expectancy and quality of life can both be improved when a complete surgical removal of these cancers is done with minimal cancer tissue being left behind. In several studies it is now proved that the most complete removal of cancer tissue is done when the surgery is performed through Laparoscopic hysterectomy in Kolkata.


Which route of hysterectomy should a patient choose?


1) Open Abdominal Hysterectomy is now considered to be an obsolete procedure which should be abandoned.


3) Laproscopic Hysterectomy:- This is the most preferred route for performing this surgery, the entire abdomen can be inspected with the laproscope and any other pathologies (diseases) present can be handled at the same time Also the availability of new equipment like Harmonic Scalpel has made this surgery a very quick and painless surgery. There is minimal blood loss (less that 50ml)during this procedure, there is minimal pain following this procedure, hospital stay for this procedure is only for 1 day, and also patient can return to work within 3-4 days, post operative problems like pain during intercourse, are less with this procedure, there is less chance of formation of a hernia after this procedure since a very small scar (1cm) is formed after this procedure. You want to know more about Laparoscopic Hysterectomy you can ask laparoscopic hysterectomy surgeon in Kolkata Dr. Sankar Dasmahapatra for further explanations. 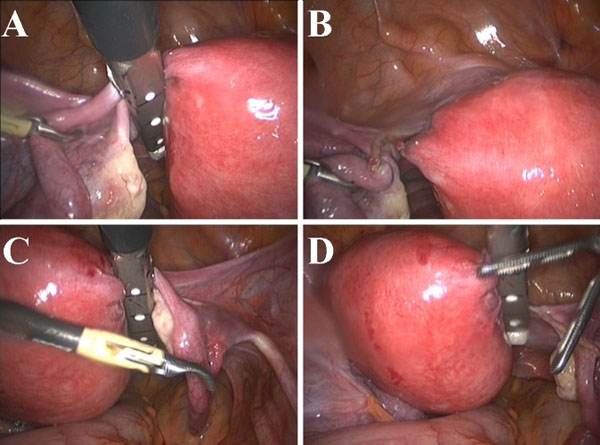 Ovaries are routinely removed at the time of hysterectomy leading to menopausal symptoms and weak bones (Osteoporosis) after hysterectomy.

Ovaries are not removed at the time of hysterectomy unless

1) Any ovarian disease is present along with the uterine disease for which hysterectomy is being performed.
2) Or if a family history of ovarian or breast cancer is present in the patient’s family.