Heavy menstrual bleeding (called menorrhagia by health care professionals) is defined as soaking a pad and/or tampon every hour or less during each menstrual cycle. For many women, heavy menstrual bleeding is a huge obstacle to their lifestyles. Have you ever had to reschedule an activity around your menstrual period? Then, you know the toll it can take. You may not know that heavy bleeding can be more than a schedule buster. The heavy bleeding can also lead to iron-deficient anemia, the most common health-related threat of menorrhagia. While most cases of anemia are easily treated with oral iron supplements, sometimes the bleeding is so severe a woman's entire volume of blood drops, leading to shortness of breath, severe fatigue and heart palpitations that require hospitalization.

There are several options you may want to try to reduce your heavy menstrual bleeding. These include:


• Ice packs. Put an ice pack on your abdomen for 20 minutes at a time, several times a day when bleeding is especially heavy. 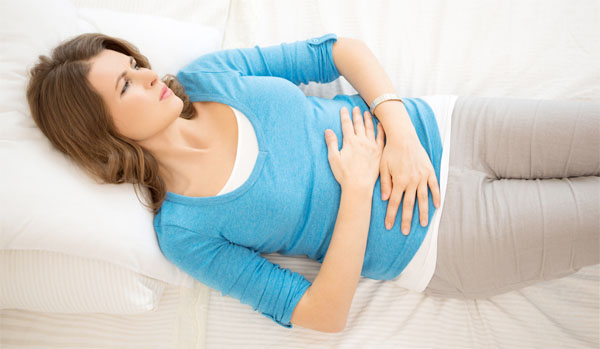 
• Nonsteroidal anti-inflammatories. These drugs, which include naproxen (Aleve), ibuprofen (Motrin), and the prescription NSAIDs diclofenac (Cataflam) or mefenamic acid (Ponstel), work by reducing levels of prostaglandins, hormone-like chemicals that interfere with blood clotting. Studies find they can reduce blood flow an average of 25 to 35 percent.


• Oral contraceptives. Oral contraceptives can reduce menstrual bleeding up to 60 percent by preventing ovulation and thinning the endometrium. One study compared them to the NSAIDs mefenamic acid, naproxen and danazol and found all four worked just as well at reducing bleeding.The combination estrogen-progesterone pill Natazia is the first birth control pill specifically approved by the FDA to treat heavy menstrual bleeding not caused by a condition of the uterus. It may help reduce bleeding in women who choose to use oral contraceptives for contraception and who do not have risk factors that make hormonal birth control use inadvisable.


• Progestin. Progestin is the most-prescribed medication for menorrhagia, with studies finding that it can reduce bleeding up to 15 percent. Progestins work by reducing the effects of estrogen in your body, slowing growth of the uterine lining. But side effects, including weight gain, headaches, swelling and depression, lead many women to quit using this option.


• Gonadotropin-releasing hormone agonists (GnRH agonists). These drugs are used only on a short-term basis because of their high cost and severe side effects. Basically, they temporarily send a woman into menopause, complete with hot flashes. However, they are very effective in reducing menstrual blood flow. But because they interfere with the activity of estrogen in your body, long-term use could lead to osteoporosis.


• Danazol. Danazol is a form of the male hormone testosterone that blocks the action of estrogen in your body. It causes your period to stop in about four to six weeks, but can have side effects, including acne and reduced breast size.


• Intrauterine device (IUD). The FDA has approved the levonorgestrel intrauterine system (Mirena) to treat heavy menstrual bleeding in women who use intrauterine contraception as their method of birth control prevention. It is recommended for women who have already had a child. This is a new indication for Mirena, which was approved by the FDA in 2000 as a contraceptive. In the clinical trial, monthly blood loss was reduced by more than 50 percent in nearly nine out of 10 women involved in the study. The Mirena system may be kept in place for up to five years. Over this time, it slowly releases a low dose of the progestin hormone levonorgestrel into the uterus. Mirena is also referred to as an intrauterine device, or IUD. The main side effect associated with Mirena can be some light bleeding between periods, particularly in the first three months of use.


• Hysterectomy. Seventy-five to 80 percent of women with heavy menstrual bleeding do not need a hysterectomy, yet many women still opt for this surgical procedure, which is frequently recommended as a treatment option.. While very effective in ending uterine bleeding (without a uterus, your periods stop), hysterectomy is a major surgical procedure that requires hospitalization and weeks of recuperation. Additionally, hysterectomy is associated with a number of complications, with infection being the most common. Ask your health care professional to fully explain the surgery and potential benefits and risks to you. Though some women may prefer hysterectomy to other surgical options, be sure you understand all your options before making a choice. Other, less invasive surgical options are:


• Endometrial ablation. In this minimally invasive procedure, the lining of the uterus is destroyed via freezing, electricity, microwaves, radiofrequency (radio waves) or hot water. Ablation is performed on an outpatient basis or in a doctor's office with mild anesthetic and has a very quick recovery. It enables a woman to keep her uterus and, in many instances, may halt her periods altogether. If you choose this treatment option, you should be sure to continue using contraception, as necessary; pregnancy following ablation is not recommended.


Other surgical procedures, including myomectomy and uterine artery embolization, are recommended if fibroids are the cause behind the bleeding. Ask about these options, if necessary.